Firefox: Move Aside and Let the Web Go Through.

There has been a little buzz lately about what the next version of Firefox should look like, and it’s certainly different.  The latest idea seems to put the tab, and tab-like items such as apps and workspaces, in the sidebar.  It’s either innovative, or an ode to iTunes, depending on who you’re talking to.

I personally oppose making our browsing experience dependent upon “workspaces” or categories…  It would take too much work for everyday browsing, it’s presumptuous to expect it would actually match most people’s browsing patterns, and it’s only adding another layer of organization to the browser, as tabs (or whatever tabs become) are still in there somewhere.  Workspaces could be useful for advanced users, but let’s not build our browser around them.

I do, however, like the general trend towards moving things into the sidebar.  As I commented on Mozilla designer Aza Raskin’s blog, there are many reasons to consider this a good move.  In fact, I say let’s take things to the next step and move the entire browser UI into the sidebar.  I spent an evening in Fireworks layout out such a design, and here’s what I came up with: 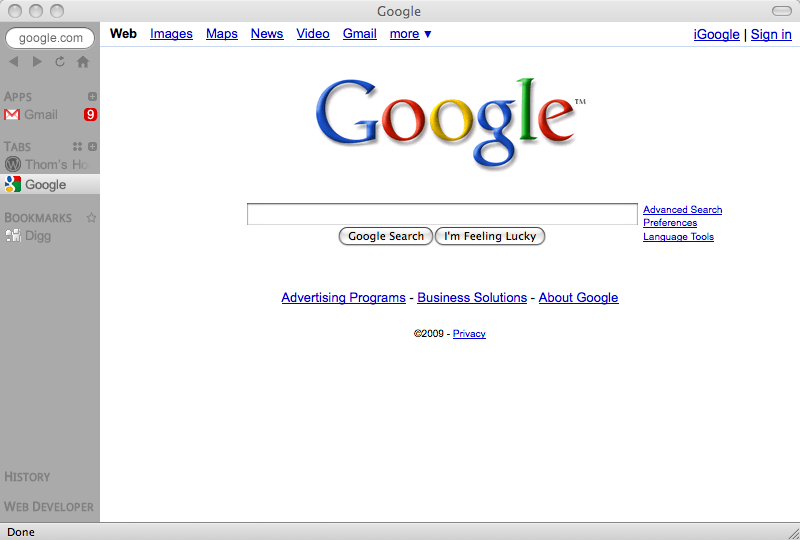 I probably went just a bit too extreme on how compact I made the sidebar (which of course, ought to be resizable anyway) but I wanted to drive home the point: done right, this exodus to the sidebar can improve simplicity, usability, and aesthetics.  The sidebar is the new awesome bar.  I’ll break things down by component:

A word of caution: let’s not throw out the baby in favor of trendy new bathwater.  In my experience, most Firefox users do not use 20 tabs at once.  They do not keep certain pages open, app-style, at all times.  They’re perfectly happy with the current user interface, and if we completely abandon it, they will balk and move to Safari or Chrome or even IE8 for a more familiar experience.  (See: Winamp.  How many of us switched to iTunes when the ridiculous Winamp 3 UI came out?)  So we need to think out a way to make this new UI work both ways, and probably give users the option when they upgrade: UI elements at top (Firefox 3) or on the side (Firefox 4).

That said, if the next version of Firefox resembles this in any way, I will be eagerly awaiting the 4.0 beta.

This entry was posted in Design, Technology. Bookmark the permalink.

6 Responses to Firefox: Move Aside and Let the Web Go Through.