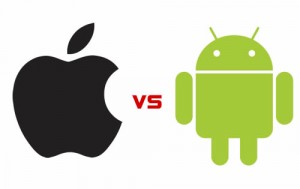 Lately, I have been asked one question more than any other question–heck, more than all other questions combined: “What phone should I buy?”  Part of my day job is spent supporting computers, browsers, email, and network connections…  And yet no one asks me about those things in passing.  It’s always about phones.  Nearly a decade after we first chuckled over the weird guy obsessed with his oversized CrackBerry…  We’ve all caught the addiction.  This is the era of the smartphone.

So…  What should you buy?

Forget about BlackBerry and Palm.  They have missed the window of opportunity for attracting developers, and a smartphone without software…  just isn’t very smart. Microsoft has actually done some interesting things with the Windows Phone 7 user experience, but I would consider its new OS an “unknown” for the time being, as Microsoft has a tendency to produce neat gimmicks with very poor follow-through.

Really, then, this becomes a simple either/or scenario: “iPhone or Android?”

Of course, to many technology fanboys, that is no simple question, but rather, fuel added to the fire of their latest holy war.  Apple hipsters will tout the iPhone’s ease-of-use; Google advocates will mention the open platform.  iFans will brag that their demographic gets laid more, and Droid-heads will…  Mention some cryptic thing about how nice “user intents” are, whatever that means.

I guess my overlap of fandom–I love my MacBook Pro, but I eat and breath Google Apps–has left me in a position to offer a fairly objective opinion: It really comes down to what your needs are.  There are a few very important questions that should guide your decision, and otherwise it simply comes down to preference.  Those questions, in order of importance, are as follows:

There are many extenuating circumstances that can trump this list, of course: carriers, coverage, keyboards, form factors…  Android, being on multiple phones and carriers, is a bit more accommodating to these circumstances.  But really, if you didn’t answer “yes” to one of the questions above, it comes down to user preference.  If that’s the case, then congratulations are in order…  Hopefully, whatever choice you make, you can remain a somewhat neutral party, avoiding the fanboy wars that will continue for a few years to come.

Caveat emptor: Android mileage varies greatly by phone manufacturer and carrier.  Android phones from T-Mobile or from Motorola’s Droid series are generally safe, HTC-branded phones have some rather invasive UI customizations. The Samsung Galaxy line of phones have made waves as the “alternative to iPhone”, but in a cruel twist of fate, some stock Android features are just plain broken in the Samsung UI.  And some cheaper phones are simply underpowered.  In lieu of writing an article about “Which Android phone should I buy?”, I will happily do my best to field any questions left in the comments.